The Philippines and Vietnam diocese 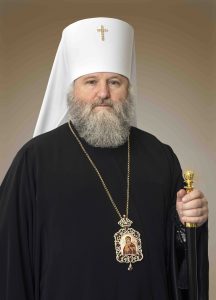 Since 1981 served as a chorister of children’s and teachers’ choir of a secondary school.

Moved to Leningrad in 1985. Carried the obedience of the reader and the psalmist at the Cathedral of Transfiguration.

After graduating the Seminary entered the Leningrad Spiritual Academy in 1992. In 1996 has defended a PHD thesis on “The Order of Malta and its history”.

On October 8, 1996 took the monastic vows with the name of Pavel in honor of Venerable Pavel, the Miracle-worker of Obnorsk and Komelsk.

On October 31, 1996 appointed as the Abbot of the Holy Trinity Ipatiev Monastery in Kostroma.

Took obedience as a member of diocesan council, the dean of Kostroma churches, head of diocesan court, and lecturer in Kostroma Ecclesiastical Academy during his service in the Kostroma diocese. Simultaneously served as the Abbot of St. John the Evangelist church in Kostroma and supervised completion of construction of the Saint Elijah church in Ilinskoe village of Kostroma region.

From October 16, 2002 to January 15, 2003 took obedience as assistant to the head of the Russian Orthodox Spiritual Mission in Jerusalem in addition to managing the monastery.

According to the resolution of Patriarch Alexis II and the Holy Synod as of December 26, 2003 dismissed from the post of the Abbot of the Holy Trinity Ipatiev Monastery and appointed as the Archbishop of the St. Nicholas Cathedral in San Francisco (USA).

According to the resolution of the Holy Synod as of August 21, 2007 (journal #65) dismissed from the post of the Archbishop of the St. Nicholas Cathedral in San Francisco and appointed as the Abbott of St. Nicholas Stavropegial parish in Rome.

According to the resolution of the Holy Synod as of May 30, 2011 (journal #31) selected as a Ruling bishop of the newly established Khanty-Mansy diocese.

On June 11, 2011 in the Throne Room of the Patriarchal private rooms in the Holy Trinity-St. Sergius Lavra named and on June 12 during the Divine liturgy held at the Dormition Cathedral of the Holy Trinity-St. Sergius Lavra consecrated to bishop of Khanty-Mansiysk and Surgut. The liturgy was headed by His Holiness the Patriarch Kirill of Moscow and All Russia.

According to the resolution of the Holy Synod as of December 25, 2014 (journal #120) appointed as a head of Khanty-Mansiysk metropolis.

On February 1, 2015 dignified as a metropolitan by His Holiness the Patriarch Kirill during the Divine liturgy in the Cathedral of Christ the Savior in Moscow.

According to the resolution of the Holy Synod as of August 30, 2019 (journal #97) in addition to the current obedience His Grace metropolitan of Khanty-Mansiysk and Surgut Pavel was put in charge of the Philippines-Vietnam diocese of Patriarchal exarchate of South-East Asia titled as “Manila and Hanoi” within the borders of the named eparchy.

• Life journey, memoirs and correspondence of Archbishop of Washington and Alaska Antonina (Pokrovskiy). 2006.

• Speech by archmandrite Pavel (Fokin) at nomination to bishop of Khanty-Mansiysk and Surgut.

• 2018 — An honored citizen of Nizhnevartovsk region.

We worship Thy Cross 18

The Lord wants real repentance and sincere prayer from us. “My soul! The end is coming”, sung in the Canon of St Andrew of Crete. Unfortunately, we only wake up in times of great danger. That’s why sorrows are allowed. They are not always a punishment for sins, because the […]

During the second week of Lent, Saturday and Sunday services were held in parishes in Ho Chi Minh city (Vietnam), Manila, Tagaytay, and Mindanao in General Santos, Kyamba and Cayupo. The parishes of GenSan and Tagaytay also held Lenten services with the Liturgy of the Presanctified gifts. General Santos hosted […]

God is with us! The first Sunday of Lent is a celebration of the Triumph of Orthodoxy as the true faith and the only Church founded by God, Whose Image, as He revealed Himself in Jesus Christ, we honor today and forever. Festive services were held in the parishes of […]

The first week of Lent is the strictest. In parishes in Manila, Tagaytay, Davao, and Vietnam, Lenten services were held daily in the morning and evening. From Monday to Thursday, the Great Canon of Andrew of Crete was read at the great Compline. On Wednesday, The Liturgy of the Pre-consecrated […]

First day of Lent in Davao 47

On March 2, on the first day of Lent, the seminar for priests and deacons of the Philippine-Vietnamese diocese took place in the parish of Matrona of Moscow in Davao city. The seminar began with a Lenten service, mostly translated into Cebuano language.Many parishioners experienced the Lenten services for the […]

On March 1, Cheesefare Sunday, a Liturgy was served at the parish of the Kazan icon of the Mother of God in Vung Tau. Most worshippers have received the Holy Mysteries of Christ. On this day, the warden of our parish has a personal holiday – his birthday. After the […]

The gates of repentance do Thou open for me, O Giver of life! 125

The spring of soul has come to us! This year it is very opportune in the face of world disasters. Let us treat the coming Lent most seriously before the wrath of God punish our nations! Those who forgive will be forgiven! On the eve of Lent the Forgiveness ceremonies […]

On February 27, in the parish of the Kazan icon of the Mother of God in Vung Tau, priest Eugeny Tsukalo met with children living in the Russian subdivision.Fr. Eugeny told the children about the national holiday “Maslenitsa”, the Lent and its significance for every Christian, large and small. He […]

On February 26, Hieromonk Cornelius (Molev), Priest Siluan Thompson and Deacon Ambrose Sumagaysay visited the community of the non-canonical Christian Eastern Catholic Church in Bacoor.  Bishop Christopher Medina Canopen, who is taking care about this community, while studying the history of the Church, and realized that he was in a […]

Presentation of the Lord in Kinabalan 145

On the Feast of Presentation of the Lord, priest Joachim Gonzales celebrated the Divine Liturgy in Kinabalan. In this town, His Eminence Metropolitan Paul served the Liturgy on his last visit. Seeing the deplorable state of the temple, Vladyka blessed to prepare a land for the construction of a new […]